An agreement was reached on Wednesday to sell the Beitar Jerusalem football club, after securing additional funding to deal with its large financial debt.

The three had met at the home of Barkat, now a Likud party Knesset member, as he worked to raise funds to facilitate the deal, eventually raising 2 million shekels ($600,000), apparently from a South African donor.

“First of all, I want to thank Nir Barkat who worked night and day to save Beitar Jerusalem and managed to get 2 million shekels,” Abramov said in a statement. “I will do everything to save Beitar and allow them to return to the path of victory.

Key to the process, law enforcement officials, who are currently investigating Hogeg’s dealings, allowed the deal to come to fruition. The Jerusalem Municipality has also drawn up a plan to help fund the club in the years to come.

However, there remained an additional hurdle to prevent the club from being kicked out of Israel’s Premier League, as they faced a midday deadline to submit their annual budget to the Israel Football Association.

After the sale was completed, the club requested a 24-hour extension so they could complete the budget documents, which was later granted.

On Tuesday, Abramov briefly backed out of the deal due to the team’s financial troubles. Hogeg then held a press conference during which he pleaded with fans and the general public to help with the sale, saying only several million more shekels were needed for it to go ahead.

Hogeg was arrested late last year on suspicion of sex crimes and cryptocurrency fraud. He was held for almost a month before being released under house arrest on bail and other financial guarantees amounting to about 70 million shekels (over $20 million) in total.

The club fell on hard times due to an unprecedented economic crisis that led to a debt of around 30 million shekels (approximately $8.8 million).

Hogeg, whose accounts have been confiscated by police as the investigation into his alleged fraud continues, has been unable to pay the debts, raising the possibility of full bankruptcy.

He insisted on Tuesday that he had tried to sell Beitar before his arrest, saying his disagreements with fans over their opposition to his signing of Muslim players and attempts to sell the club to an Emirati owner had ultimately become impassable. 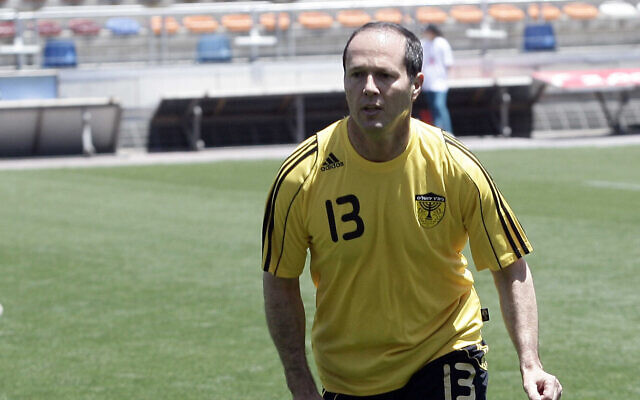 Nir Barkat, then mayor of Jerusalem, wearing the uniform of the Beitar Jerusalem football team during a friendly match on May 13, 2010. (Abir Sultan/Flash 90)

Beitar is one of the most famous franchises in the country, counting Israeli presidents and prime ministers among its fans.

But it also drew negative attention for many years for being the only major club never to have an Arab player, and for racism from some hardcore fans.

In particular, a group of diehards called La Familia engaged in racist behavior during matches.

Supporting The Times of Israel is not a transaction for an online service, like subscribing to Netflix. The ToI Community is for people like you who care about a common good: to ensure that balanced and responsible coverage of Israel continues to be freely available to millions of people around the world.

Of course, we’ll remove all ads from your page and you’ll unlock access to great community-only content. But your support gives you something deeper than that: the pride of joining something that really matters.

Join the Times of Israel community Join our community Already a member? Log in to stop seeing this

You are a dedicated reader

We’re really glad you read X Articles from The Times of Israel over the past month.

That’s why we started The Times of Israel ten years ago – to provide discerning readers like you with must-read coverage of Israel and the Jewish world.

So now we have a request. Unlike other media, we don’t have a paywall in place. But since the journalism we do is expensive, we invite readers to whom The Times of Israel has become important to support our work by joining The Times of Israel community.

For just $6 a month, you can help support our quality journalism while benefiting from The Times of Israel WITHOUT ADVERTISINGas well as access Exclusive content only available to members of the Times of Israel community.

Thanks,
David Horovitz, founding editor of The Times of Israel